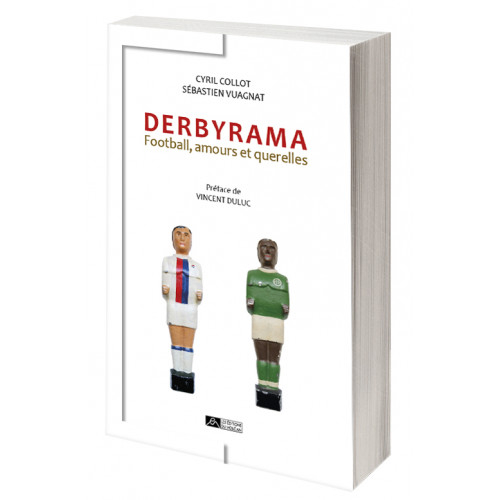 This book is a declaration of love to the soccer matches between Lyon and Saint-Étienne, quite simply the most beautiful derby in France.

PRESENTATION OF THE BOOK

In terms of rivalry between two French clubs, there is nothing better! The derby between Olympique Lyonnais and AS Saint-Étienne is unique and tells the story of two cities, two clubs and two publics that everything opposes.

DERBYRAMA, soccer, loves and quarrels is co-written by two journalists who love these confrontations and are specialists in the field. Through a hundred short chapters, Cyril Collot and Sébastien Vuagnat explore the incredible richness of this duel that has fascinated crowds for seventy years: the memories, the stories, the words, the exploits and even the reveries... Since October 1951, OL-ASSE has been one of the most beautiful matches in the French championship.

The authors place themselves in the center of the field and take turns wearing the green shirt and the red and blue one. They summon the great stars, all generations combined: Platini versus Juninho, Herbin versus̀ Benzema, Payet versus Domenech, Roger Rocher and Jean-Michel Aulas. They send back face tò face the fans of both camps: Bad Gones and Magic Fans, Gerland and Geoffroy-Guichard. They awaken the cult phrases, banners and anecdotes that make the salt of the appointment and feed as well The two authors take us on a journey through the world of football, from the heart of the city to the heart of the city.

The two authors take us for a ride on the winding road that separates the two cities, on either side of the border, between the Rhône and the Loire. Over the pages, the puzzle of this sporting history takes shape and offers a panorama that gives an additional human dimension to the confrontations between the two greatest enemies of French soccer. The derby: a match fed by soccer, of love and quarrels

Delivery within 4 to 7 working days* for 2 € for orders under 10 € and free for orders over 10 €. You will be informed of the availability of your package by e-mail.

Addresses of the OL Store :

* All the deadlines are expressed in working days, subject to availability of the articles, for Metropolitan France.

Please allow 1 to 2 working days of extra transport to Corsica.

Returns are free of charge for all orders in metropolitan France via Colissimo, within 30 days of receipt of the order.