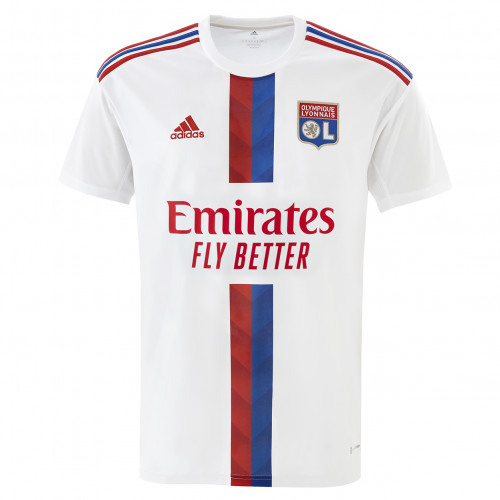 To celebrate the club's tradition and identity, the iconic red and blue center stripes are back.

The jerseys with the LACAZETTE player flocking are in pre-order, they will be delivered mid-July.

The jerseys with the LACAZETTE player flocking are in pre-order, they will be delivered mid-July.

adidas and Olympique Lyonnais present the jersey that will be worn by the players during their home games for the 2022-2023 season. The jersey is a celebration of the club's identity and DNA, featuring the three colors worn by the men's and women's teams: a white background with two vertical stripes in red and blue.

Central and already worn during the 2016-2017 season, these emblematic stripes are making their comeback at Olympique Lyonnais, just like the child of the club, Alexandre Lacazette.

To embody a little more its historical roots, the shirt also incorporates the presence of the chevron present in the vertical stripes. It is a real return to the roots that is expressed through this visual, since the chevron was already on the 1953-1954 jersey, a record season in terms of offense, but also during the return of OL in Division 1 in 1989-1990 and in the European Cup at the end of the 1990-1991 season.

Finally, the new jersey celebrates the beautiful game played by its different teams, both professional and youth from the Academy, a showcase of Lyon's training recognized as one of the national and European references.

Past, present, future: this jersey reminds us that Olympique Lyonnais forges its destiny with its unique DNA.

Designed in collaboration with adidas from 100% recycled materials, this product is just one of our solutions to fight against plastic waste.

Delivery within 4 to 7 working days* for 2 € for orders under 10 € and free for orders over 10 €. You will be informed of the availability of your package by e-mail.

Addresses of the OL Store :

* All the deadlines are expressed in working days, subject to availability of the articles, for Metropolitan France.

Please allow 1 to 2 working days of extra transport to Corsica.

Returns are free of charge for all orders in metropolitan France via Colissimo, within 30 days of receipt of the order.